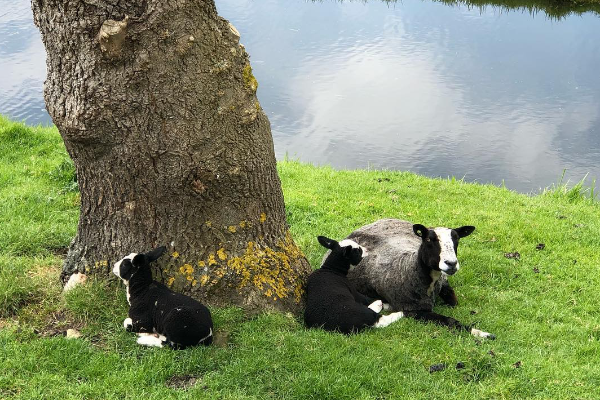 Foot rot is caused by an association between (Dichelobacter) Bacteroides nodosus and Fusobacterium necrophorum. The association is synergistic with each organism contributing to the pathogenic process while assisting the other to grow in the infected tissues. Some injury to the skin or horn and lowering of its resistance is necessary to provide a portal of entry, the intact healthy skin being resistant to infection. Maceration caused by continued wetness and injury or overgrown horn are the main factors in rendering sheep susceptible. This is primarily a disease of adult sheep but growing lambs can also be affected. 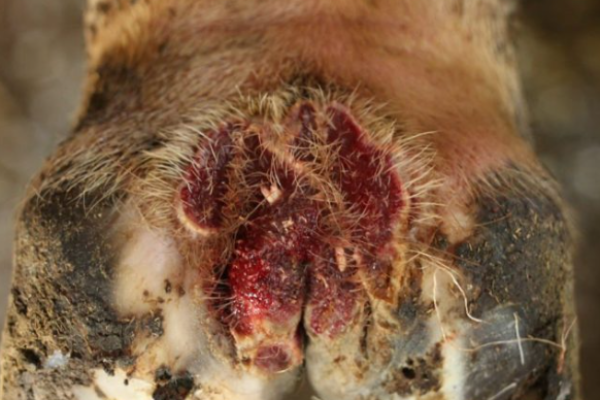 Following invasion by the causal agents, the interdigital skin becomes inflamed and moist. This is followed by a breach in the skin-horn junction and damage to the underlying tissue. The separation of the horn is most marked initially at the bulbs of the heel but subsequently spreads to involve the sole and the walls of the hoof.

The earliest sign is a swelling and moistening of the skin of the interdigital cleft particularly in the region of the heel. This is soon followed by a break in the skin-horn junction and then a separation of the adjacent soft horn. At this stage the lesions are usually mild and there is little or no pus, but the sheep shows lameness and the feet feel warmer than usual. During the next 5 to 10 days the infection spreads, causing separation of the horn across the whole sole, and the sheep becomes very lame. The infection may then extend under the walls so that nearly all the hoof is separated from the soft tissues.

Both digits on the one foot are almost invariably involved. After infection has spread under the sole there may be a new growth of horn over the sole but this usually again becomes involved in the destructive process extending from the skin in the interdigital space, where the infection tends to persist for long periods. On feet which have been affected for several weeks or months the hoof becomes long and misshapen. 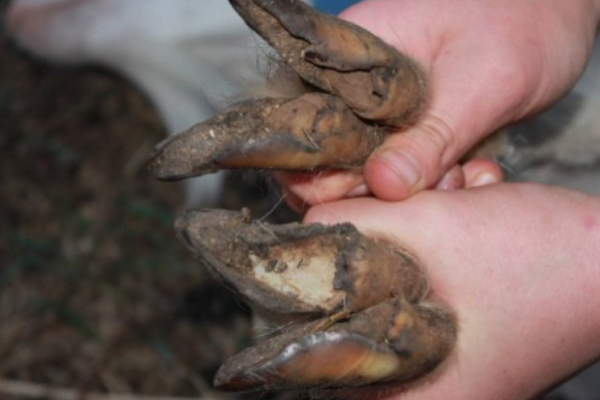 Some cases develop deep abscesses. In advanced cases there is extreme lameness, and if only one foot is affected it is usually carried. Two or more feet are frequently affected in the one animal, and in this case the animal lies down most of the time, moves with great difficulty, and becomes thin with inability to graze properly. When the two forefeet are affected the animal adopts a characteristic attitude of kneeling while grazing.

The feet of the entire flock should be examined and all affected sheep separated. The feet of affected animals should be pared taking care to remove all horn which shows the slightest separation. Adequate and careful paring is essential and care should be taken to prevent bleeding particularly when granulation tissue is being exposed.

Following paring each foot should be dipped in an antiseptic solution, or 10% formalin, or sprayed with an oxytetracycline spray. Zinc sulphate (10%) or zinc lauryl sulphate (improved penetration) are probably the best foot bath preparations. Animals must stand in this for 30 mins for eradication.

The unaffected portion of the flock should be passed through a footbath of 5% formalin or 10% zinc sulphate and moved after 1 hour*s rest on a concrete floor to grass which has been free of sheep for at least 14 days.

The affected group will require further treatment and should be moved to another fresh pasture or, if not available, back to the original grazing; they should be passed through the above footbath on two or three occasions at no sooner than weekly intervals accompanied by gradual paring of regressing granulation tissue, until the feet are healed. Any animals which resist treatment should be culled. In severe cases treatment with penicillin may be necessary.

This can be achieved by segregating affected animals as described above and not putting them back to the main flock until all lesions have healed. Because of the high labour costs involved in farming it is generally not possible to pass sheep through foot baths regularly but the footbath containing 5% formalin or 10% zinc sulphate should be used whenever sheep have to be gathered and the flock should be watched closely for lameness, particularly during wet weather, when prophylactic measures can be carried out without delay.

Newly purchased sheep should be examined for foot rot and routinely put through a footbath.