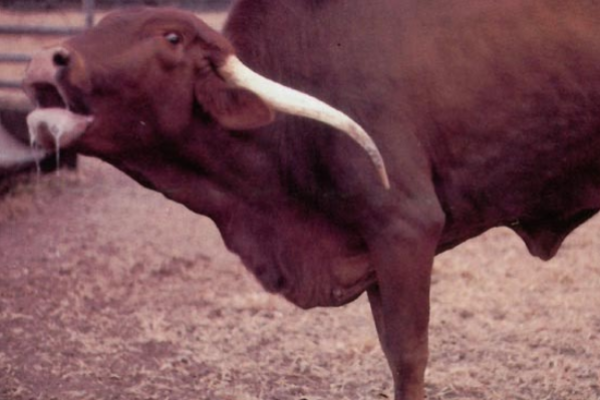 Rabies is a deadly viral infection affecting all mammals, including humans. Rabies is spread in the saliva of a rabid animal, typically through bite wounds. Cattle may show changes in behavior, excessive vocalization, have difficulty swallowing, drool, and/or become paralyzed. By attacking the nervous system, brain and spinal cord, Rabies can cause brain deterioration and death.

It is preventable through the use of vaccinations, an option available since Louis Pasteur introduced a vaccine in 1883. All mammals are thought to be susceptible to the rabies virus, a fatal viral zoonosis caused by the Lyssavirus causing acute inflammation to the brain (Encephalitis).

It is considered to be all but 100 per cent fatal.

A bite from an infected wild animal, such as a fox or raccoon, is a common method of infection in cattle. Saliva is the main method of transmission of the virus being shed through infected cattle and spreading through the body via the bloodstream.

It travels to the spinal cord where it can incubate for months on end, although 3-12 weeks is common. From the spine the virus moves into the brain, at which point clinical signs of rabies often appear in cattle. It is possible for the virus to enter the body through orifices and lacerations to the skin. This however, is uncommon. Open wounds, mucous membranes, eyes and the mouth are possible entrance points for the virus. Under normal conditions the virus is not spread through the air, though this method of transmission is possible.

Often presented in a single animal rather than the full herd, rabies can be spread due to the curious nature of cows who will inspect raccoons, dogs, foxes etc. that are exhibiting strange behaviour.

Transmission from unpasteurised cow's milk to humans is currently being scrutinised although properly cooked meat and pasteurised milk from infected animals poses no danger to humans.

The slobbering, aggressive cow is only one way that the disease presents. Initial signs of the disease may be quite mild with cattle appearing depressed, not eating and isolating themselves.

The cow may appear to be choked. As the disease progresses function of some body parts decreases. This might result in the inability to swallow so that saliva is drooled but it might also be weakness in a leg or legs or a drooping ear or head.

Animal behavior may also be varied. A few rabid animals are aggressive but many are sleepy and constant bellowing or straining is also seen.

Most animals affected by the disease die within a week from the time that signs are first seen.

Aggressive, excitable or exaggerated movements can be signs of rabies. Sexual activity can be increased, including mounting behaviour.

Bulls can have persistent erections or a prolapsed penis.

• Initial vaccination at 4months, except where mothers have been previously vaccinated, in which case primary vaccination should be delayed to 9mths.

• After this a booster at a year and following that every 3yrs while the outbreak persists.

Prevention of rabies in cattle is not an easy task. Vaccines are available but are so expensive that their routine use in cattle herds is not recommended unless a farm has a very high threat of the disease.

Cautious handling of cattle with undetermined illnesses is recommended, especially if neurological signs have been observed.

Examining a cow's mouth should be done with gloves to avoid exposure of the veterinarian's or stockman's hand to saliva. There are no tests available for rabies in live animals.

Determination normally requires a post-mortem inspection of the brain.