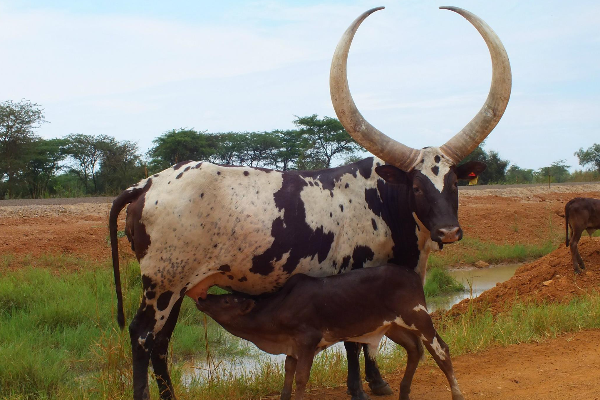 Ankole-Watusi "cattle of kings" are the show-stoppers of the bovine kingdom. Medium-sized animals, with long, large-diameter horns, they attract attention wherever they appear. These regal animals can easily trace their ancestry back more than 6,000 years.

What Is The History Of Ankole Watusi Cattle Breed?

Long-horned, humpless domestic cattle were well-established in the Nile Valley by 4000 B.C. These cattle, known as the Egyptian or Hamitic Longhorn, appear in pictographs in Egyptian pyramids. Over the next twenty centuries (2.000 years), the Egyptian Longhorn migrated with its owners from the Nile to Ethiopia, and then down to the southern reaches of Africa.
By 2000 B. C., humped cattle (Longhorn Zebu) from Pakistan and India reached Africa. When these Zebu reached the region now known as Ethiopia and Somalia, they were interbred with the Egyptian Longhorn. The admixture produced -- the Sanga spread to the Sudan, Uganda, Kenya, and other parts of eastern Africa, becoming the base stock of many of the indigenous African breeds.
The Sanga demonstrated most of the typical Zebu characteristics, such as pendulous dewlap and sheath, upturned horns, and a neck hump of variable size. Modern descendants of the Sanga, however, vary greatly in size, conformation, and horns, due to differing selection pressures by different tribes.
Particularly remarkable are the cattle found in Uganda, Rwanda, and Burundi. In Uganda, the Nkole tribe's Sanga variety is known as the Ankole. In Rwanda and Burundi, the Tutsi tribe's Sanga variety is called the Watusi. The Rwanda common strain of Watusi is called Inkuku. The giant-horned strain, owned by the Tutsi kings and chiefs, is called the Inyambo, though some current tribal reports claim that this type is now extinct.
Traditionally, Ankole-Watusi were considered sacred. They supplied milk to the owners, but were only rarely used for meat production since an owner's wealth was counted in live animals. Under traditional management, the Ankole cow was grazed all day, then brought home to her young calf. The calf was allowed to suckle briefly to stimulate milk letdown, then the cow was milked by the herdsman. The calf suckled after hand-milking was finished and was again separated from its mother. The process was repeated in the morning. This minimal nourishment of calves resulted in high death rates in the young. Milk production was not high, with a typical cow producing only 2 pints of milk daily, although an exceptional one could manage up to 8 pints. In addition, the lactation period was short.
Over the last 10 years, the national government has attempted to select for animals that produce more milk and have better meat production. Famine and disease, as well as the conflict with traditional practices, have slowed this effort. Because of their striking appearance, and the resulting ability to attract paying customers, Ankole cattle were imported from Africa by European zoos during the late 19th and early 20th centuries. Zoos and game parks in Germany, Sweden, and England were among the breeders of these cattle outside Africa. The cattle were called Ankole, or Ankole-Watusi, and they were treated as a single breed.
American zoos and other tourist attractions imported Ankole-Watusi cattle from European zoos in the 1920s and 1930s. As time went on, and zoos began to change their emphasis from visually-exciting animals to those (wild) animal species in desperate need of preservation (whether "eye-catching" or not), more Ankole-Watusi cattle became available for sale to private individuals and several private herds were begun.
In January 1983, North Americans interested in the Ankole-Watusi cattle breed met in Denver, Colorado, and formed the Ankole Watusi International Registry. Many of these people had been raising Ankole-Watusi cattle since 1978. They felt that it was time to begin a breed registry that could collect and maintain pedigree information and conserve this interesting breed. Within five months, the Registry had 74 members nationwide. These members shared a strong commitment to the breed, though they had different priorities for it. Some wanted to concentrate solely on the prevention of breed extinction; some selected for their utility in the production of superior cross-bred roping animals. Still, others championed the low-fat and low-cholesterol meat values after these were discovered.
In 2016 the total number for the breed was thought to be approximately 1500 head, some 80% of them in the United States.
On Guinness world records Largest horn circumference on a BULL ever registered on 20 September 2004 as The largest horn circumference on a bull measured 103.5 cm (40.75 in) on 20 September 2004 and belong to CT Woodie, an Ankole Watusi bull owned by Duane and Kolene Gilbert of Castle Dale, Utah, USA. Bulls and steers are judged differently at cattle competitions, hence this separation from Lurch. Also On Guinness world records Largest horn circumference on a STEER ever registered on 06 May 2003 as The largest horn circumference on a steer measured 95.25 cm (37.5 in) on 6 May 2003 and belong to Lurch, an African watusi steer owned by Janice Wolf (USA) of Gassville, Arkansas, USA. Sadly, Lurch died at 3 p.m. on 22 May 2010 of cancer at the base of one of the horns. The body has been released to a local taxidermist, who will produce full-sized taxidermy of the steer. 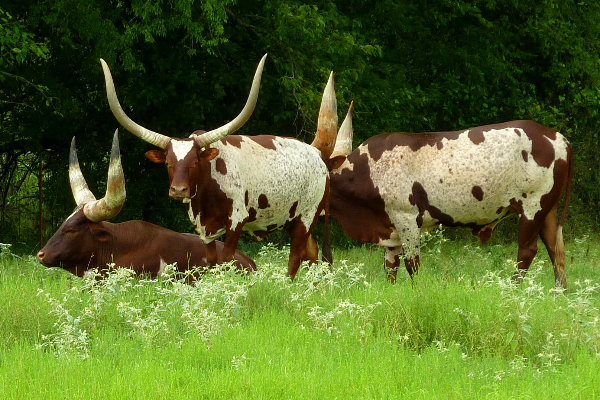 What Are The Characteristics Of Ankole Watusi Cattle?

What is the weight of Ankole Watusi Cattle? 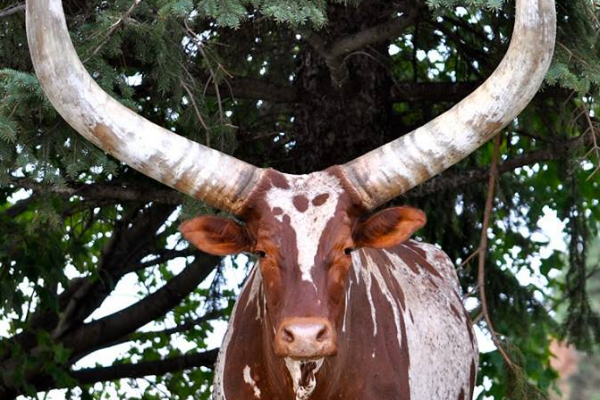