What Is The History Of Droughtmaster Cattle Breed?

With the arrival of cattle ticks into North Queensland in 1896, it became apparent that maintaining herds of British breed cattle (such as Shorthorns, Herefords and Shorthorn-Devon cross) in the harsh tropical environment was virtually impossible. Consequently, graziers began experimenting with crossbreeding.

In 1910, something of a breakthrough appeared in Australia’s attempts to breed cattle that could thrive on the country’s land. Curators at the Melbourne Zoo loaned three Zebu bulls, the country’s first imported Bos indicus cattle, to the graziers. The crossbred offspring of the humped South Asian animals were better suited for the Australian countryside than straight British breeds, though they didn’t have the proportions familiar to graziers.

The severe drought still raged in 1926, when one R L (Monty) Atkinson set himself to the task of creating a breed which had the attributes required to withstand the severe environment of the tropics, but in the right proportions to retain the benefits offered by the British breeds. A consignment of Brahman cattle was imported into Queensland in the early 1930's and Monty Atkinson was given access to three red half-bred Brahman bulls, which through the following years he joined to Shorthorn and Shorthorn-Devon cross females. Eventually, the innovative breeders arrived at a beef cow that was just about perfect for Australia’s inhospitable environment: the Droughtmaster.

Currently the Droughtmaster cattle are available throughout the mainland states, with the largest numbers are available between Cape York and the New South Wales border. The breed has also exported to South-East Asia and as well as to Pakistan, Nigeria and a number of South Pacific islands. 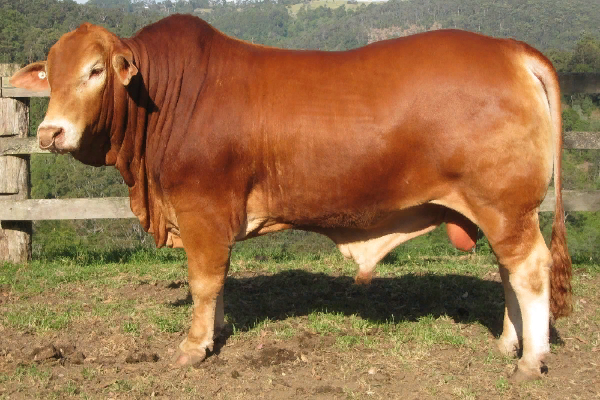 What Are The Characteristics Of Droughtmaster Cattle Breed?

Droughtmasters are medium to large cattle with medium maturity. The breed is basically red in color, although variations from a golden honey color to dark red occur. It has a short sleek coat with loose skin. Animals may be polled or horned. They have medium to large sized ears, while they also have an extended dewlap. The Droughtmaster, like it’s Zebu ancestors, have a moderate hump on its back. Their skin pigmentation is red, which helps protect them from sun cancers, photosensitisation and sunburned udders. They have a high resistance to bloat and are tolerant of ticks.

The Droughtmaster cattle are noted for good fertility, ease of calving and very good mothering ability under harsh conditions. Females have high milk production traits. The breed also has a quiet temperament making it easier to handle.

They also have great digestive efficiency, meaning they gain more from their feed than most breeds. In addition to requiring less water than other beef cattle, the breed has a markedly slow metabolic rate. The Droughtmaster is known for its ability to withstand unbearable heats. This enables them to live in the extremely high heats accustomed to the Queensland area.

The breed is very good for meat production, yielding a carcase with a high percentage of well-marbled, good-colored meat. They have shown good average daily weight gains in pasture and feedlot trials when compared to other cattle breeds.