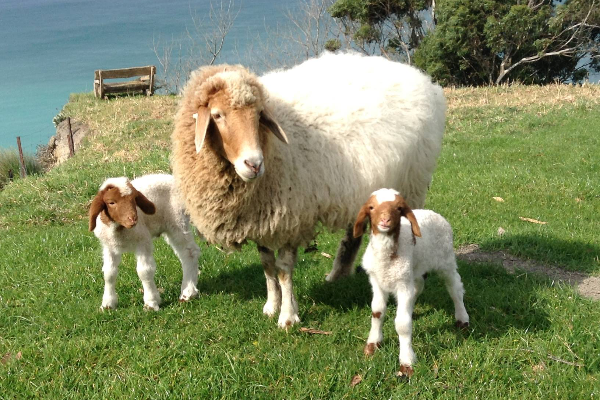 What is the history of Awassi Sheep?

In the north of the Kingdom of Saudi Arabia, it is bred under desert conditions.

In Turkey, the Awassi makes up one percent of the ovine population; its breeding area is situated in southern Anatolia in a border strip along the main range habitat of the breed in the Syrian Arab Republic.

The name of the Awassi is attributed to the El Awas tribe between the Tigris and Euphrates rivers. In literary Arabic, awas is the term for the red-and-white camel garb or for a white sheep. The name of the breed is also sometimes spelled Awasi, Aouasse, El Awas, Oussi, Ussy or Iwessi; in Turkey it is called Ivesi or Arab and in some parts of the Syrian Arab Republic, Nu'amieh or Shami, the latter being the Arabic name for Damascus.

Fat-tailed sheep have been bred in the breeding area of the Awassi for at least 5 000 years. In physical and functional properties, the Awassi seems to be very close to the prototype from which the fat-tailed sheep of Asia, Africa and Europe are derived. Many of these still show a close likeness to the Awassi. This holds true not only of the sheep of Cyprus and North Africa and several Turkish and Iranian breeds but animals similar to the Awassi are also encountered among the Ronderib Afrikander sheep of South Africa and the Mongolian sheep of eastern Asia.

Fat-tailed breeds deviating from the Awassi in some physical or functional properties may owe their characteristics either to evolution in a different environment, specialized breeding aims or to cross-breeding.

What are the characteristics of Awassi Sheep?

Awassi Sheep medium-sized sheep of milk and mutton type. The bodily proportions are affected by the size and weight of the fat tail, which produces the impression of a lack of balance between fore- and hindquarters. In Awassi ewes this impression is enhanced by the large udder.

The head of the Awassi is long and narrow, with a convex profile. In adult, strongly horned rams, the convex line of the profile may be broken by a slight indentation between the forehead and the markedly curved nasal part of the head. The ears are pendulous, about 15 cm long and 9 cm broad. Occasionally the auricula is rudimentary or entirely absent.

Awassi Rams are nearly always horned. The horns, which are 40-60 cm long and strongly wrinkled, curve backward and downward with the tips directed outward. In the Syrian Arab Republic and Iraq, Awassi rams with up to six horns are occasionally encountered in Bedouin flocks; such horns show a high degree of variability and lack symmetry in shape and direction.

Awassi Ewes are commonly polled. Fully developed, 10- to 15-cm-long horns are rare in Awassi ewes. The neck is fairly long, lappets being frequent. The chest is also long but of only moderate depth and width, with a small, thin dewlap and prominent brisket.

In unimproved flocks, narrowness at heart is a common weakness. The back is long and straight, the anterior part of the rump relatively broad and nearly on a level with the back, but the rump is short with a slope to the fat tail. The barrel is deep and wide. The legs are of medium length and thickness; not as short and sturdy as those of the early maturing mutton breeds of the United Kingdom nor as long and thin as the legs of the thin-tailed sheep of the savanna region of West Africa. They are usually well placed, with strong pasterns and durable hoofs.

The fat tail is broad and relatively short, usually ending above the hocks, more rarely extending below them. Long fat tails present an obstacle in the process of milking. In adult Iraqi Awassi rams, the average length of the fat tail is close to 30 cm and its width 25 cm; in ewes, the length averages 18 cm and the width 15-16 cm. In rams, the fat tail may weigh as much as 12 kg and in ewes up to 6 kg; in heavy male lambs it may reach 8 kg. Without the fat cushions, the tail weighs about 70 g.

The main portion of the tail emerges from the lower part of the rump with the same width as the thurls and hangs down in two lobes which are separated by the caudal skeleton and are bare of hair or wool on the under-surface. In the middle of the lower portion, the lobes are not connected but are separated by a deep notch which gives the underside of the tail a heart-shaped appearance. Slightly above the notch, the tail skeleton turns upward to emerge from the fat moieties, producing a hairy tassel of variable length which hangs down from the upturned tail skeleton.

In unimproved Awassi ewes, the udder and teats are of variable shape with numerous faults. In some animals, the udder is pendulous, occasionally extending down as low as the heels or it may have the shape of two bottles or sausages with a deep indentation between the two halves. Frequently the teats are very small, with either a downward, lateral or upward direction, or they may project, not from the bottom of the udder but from the outer sides, rendering milking difficult. In ewes of improved dairy type, the udder is generally well attached, of moderate depth, not pendulous but of globular shape, wide between the legs, elongated anteriorly and extending well to the rear. The teats are of fair length and thickness, with a downward direction.

The skin of the Awassi is moderately thin and elastic, unpigmented and very sensitive. In aged animals, it loses its fineness and becomes thicker and coarser. There are no folds on the neck or body but a thin dewlap extends from the throat down to the brisket.

The head and ears of the adult Awassi are covered with short, stiff hair, and the back, sides of the body and posterior part of the fat tail with wool.Up to the age of 12-15 months, Awassi sheep have the entire neck, including the throat, also covered with wool. In the large majority, the wool later disappears on the throat, and in many animals the neck also becomes short-haired, except for its top ridge.

In the ram, a fringe of longer and coarser wool extends from the throat along the dewlap to the lower part of the brisket. In young lambs, wool grows on the belly; as the animal grows older, this is replaced by fairly long, coarse hair.

The forelegs are usually short-haired, while the hind-legs may also be woolless or, more rarely, be thinly covered with short wool down to the hocks, sometimes as far down as the fetlocks. Some animals have a white blaze on the head. 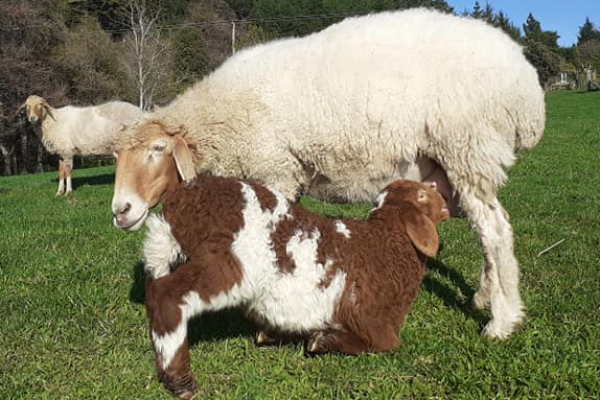 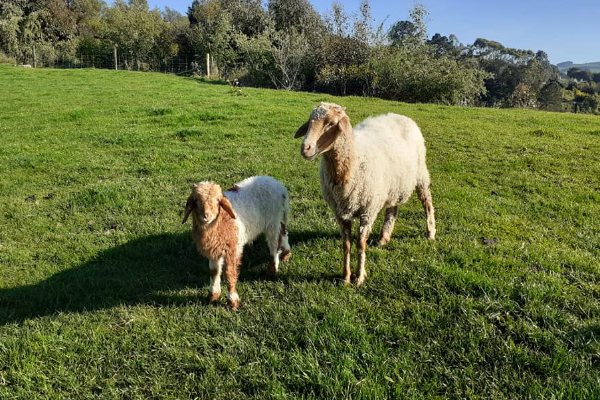 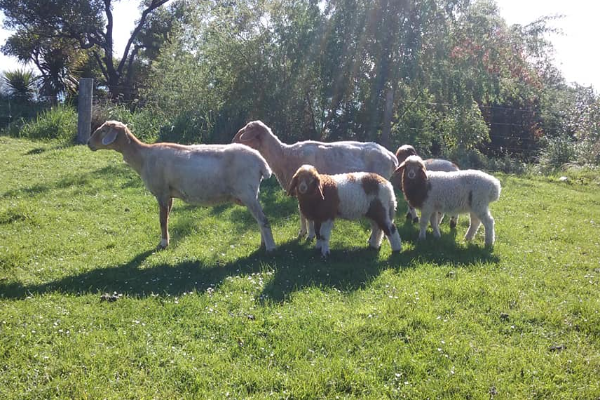 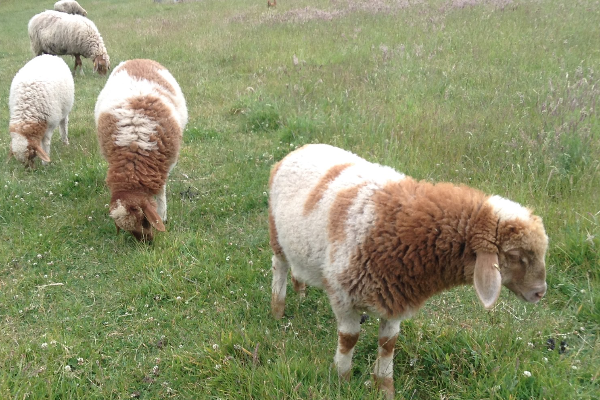 Lambs born with a light-brown whole-coloured or spotted coat frequently grow white fleeces after first shearing. The hoofs of the Awassi are dark brown.

In unimproved Awassi flocks, the ewes lamb for the first time at the age of two years or more. In improved dairy flocks, female lambs born early in the season come into heat in August at the age of nine or ten months, and are served or inseminated at the first heat. Those in which natural oestrus is delayed are given hormone treatment in September or October, provided that they weigh not less than 50 kg. About 60-70 percent of the young ewes lamb as yearlings, the rest at the age of two years.

The Awassi Sheep has long wool with an open, lofty and moderately lustrous fleece of carpet wool with distinct, wide crimps. The fleece consists of an outer coat, an undercoat and kemp. It has the principal requisites of carpet wool, namely coarseness and resilience, qualities that make carpet wool resistant to matting down and to wear under the constant scuffing of passing feet.

An ideal carpet wool should have a fibre diameter of 30 m, a fibre length of 10 cm with a 20 percent variation in length, and 4 percent by weight of kempy fibres. Awassi wool complies with these requirements as regards fibre thickness and length, but the fibre length has a greater variation and kemp contents are somewhat greater.

What is the weight of mature Awassi Sheep? 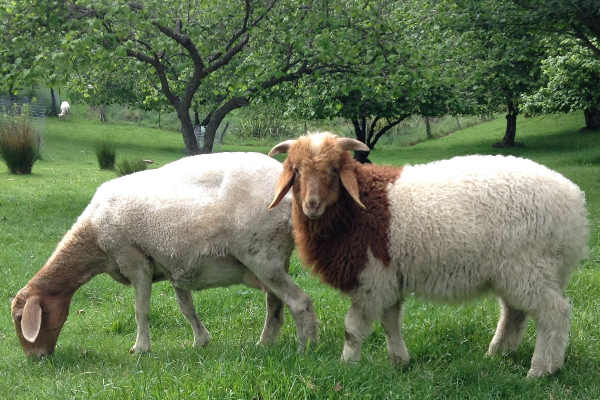 The weight of unimproved adult Awassi rams throughout the range of the breed varies between 60 and 90 kg, and of Awassi ewes between 30 and 50 kg.