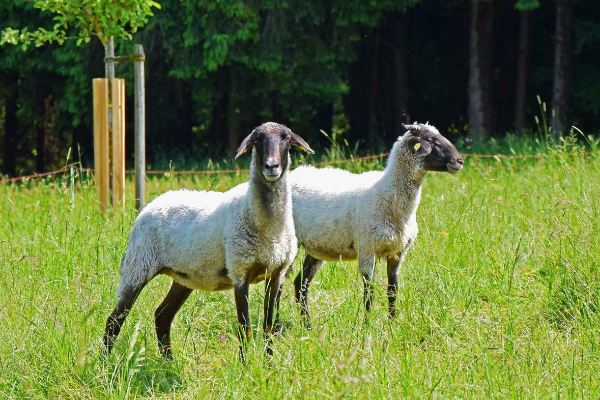 What is the history of Alpines Steinschaf Sheep?

The Alpine Stone sheep (Alpines Steinschaf in German language) is an old and traditional sheep breed, which has been living in the Alps for hundreds of years.

It is well adapted to rough weather conditions of high locations. This small and apparently delicate sheep is an agile climber and it is well suited for grazing in rocky and exposed alpine regions.

Direct descendant of the so called Zaupel or Neolithic Torfschaf and so it is one of the original breeds of the European Alps.

In 1863 about 208 000 animals existed. In Austria this breed was kept mainly in the area of Salzburg and Tirol.

Since 1985 some interested breeders from Germany and Austria started to collect the last individuals of the breed and found around 30 animals left.

In 2009 the Alpines Steinschaf was named endangered livestock breed.

In 2014, it was listed as "extremely endangered" on the red list of endangered animal breeds of the GEH.

What are the characteristics of Alpines Steinschaf Sheep?

The Alpines Steinschaf is well adapted to rough weather conditions of high locations. The small and delicate sheep is a agile climber and is well suited for grazing of rocky and exposed alpine regions.

The breed has a high fecundity and a good feed conversion. Because of unseasonal heats lambing occur twice a year where twin births are common.

Ewes are even if they are fed badly in heat four weeks after lambing (fertility 180-200 %). Positive maternal ability with a high milk performance and low susceptibility to mastitis guarantee a secure rearing of lambs.

Both sexes are mostly horned. The rams usually have spirally curved horns, the ewes sometimes small and lightly curved horns. The legs are thin but strong with hard hooves.Their long woollen tails reach down as far as the ankle joint and the ends are often bent.

Due to its slender body, it allows to obtain a comparably high dressing percentage. The quality of its fine fibres meat - similar to wild game - makes it peculiar in comparison to the meat from mutton sheep. The Alpines Steinschaf also provides high quality lamb meat.

Dual coated fleece with pithy, long coarse hair and fine wavy and short under coat, every wool colour from white to black to browns, as well as brindled. Ewes produce about 3-3.5 kg of wool, rams about 4- 4.5 kg of wool, very low price or even no use for the wool.

For many years breeders had to send the wool to the rubbish, because there was no need for this product. In November 2004, three breeders of Alpines Stone sheep decided to jointly process their wool. During the annual Alpine Steinschaf breeders meeting in 2005, they exhibited their wool products in order to convince other breeders to establish joint wool processing and marketing. This initiative was the very starting point for the project. Every year since then, all the breeders of the Alpines Stone sheep meet at the annual breeders meeting to collect their wool together.

In exchange, the breeders get a so called “wool voucher” (2 € per kilogram of greasy wool); this voucher can be exchanged later into woollen Alpine Stone sheep products like knitting yarn, socks or sweaters to be sold by the breeders themselves through their farm shops or at local fairs.

What is the weight of mature Alpines Steinschaf Sheep?