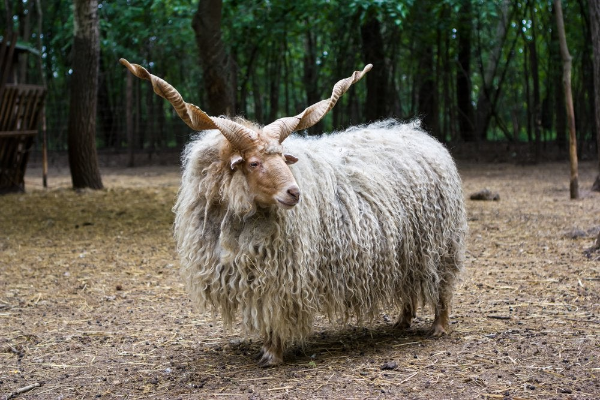 What is the history of Racka Sheep?

The Racka belongs to the large group of Zackel-sheep, living in South and East-Europe, as the Vlach in Greece, the Karakachan in Bulgary, the Pramenkain Yugoslavia, Walachian in Czechia and Slovakia, the Volochian in Russia and so on.

The Racka Sheep originally come from Hungary and have existed at least since the 1800s when there was a first registry established. Their history goes further back than that though : In South-West Asia have been found skulls and bones of Racka-like sheep dating from about 11.000 years ago.

About 8.000 years ago, in Mesopotamia, the ancient Iraq, and in the ancient Egypt lived long-tailed sheep with the same drill-shaped horns as the Racka, as can be seen on wall-paintings found in local caves. Possibly, the Racka is originating from the wild Middle-Eastern sheep: the Ovis ammon arkal.

The Racka left his original area during the Great Migrations. The Avars, Petschenegs, Jazygs and Huns brought them to Central and East-Europe. In 1750, half of the total flock of seven million Hungarian sheep were Rackas! Somewhere around that time, about 50.000 lambs and sheep were traded on the market near the Hortobâgy Bridge.

Economically, in these days the Racka was very interesting: they managed to survive quite well on the open, dry and poor plains of Hungary, the Puszta. The fleece of 2-3 day old lambs were sold to make very fine bonnets and collars for the richer Hungarians.

The in the 18th century imported Merino, now 95% of the total Hungarian flock, almost drove the Racka to total extinction.

In 1939 the Hungarian government had to interfere and centralized the lasting 4000 Rackasheep on a State farm in Hortobâgy, on the puszta east of Budapest. Wrong methods of reproducing and far-going consanguinity made that during the Second World War, there were only 1450 Rackas left.

In the 50's the flock was decimated till about 200 ewes! The state farm of Hortobâgy was ordered from the Hungarian government to save the Racka.

In 1973, the Hortobâgy area was installed asthe first National Park of Hungary and the Racka was saved; Now there are about 5000 Racka ewes again.

In 1983 the organisation of Hungarian Racka breeders was founded in Debrecen. Now the exceeding part of Racka ewes may be exported again, though a number of minimum 750 ewes has to be kept in the National Park of Hortobâgy, thus creating a genetic bank for the Magyar Racka.

What are the characteristics of Racka Sheep? 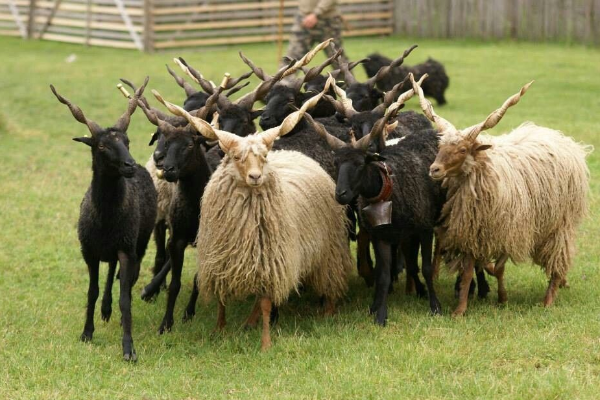 The Racka is a relatively small sheep with large horns, a mixed fleece, a long body and fine bone-structure.

The fleece can have two colors: black and cream-white. Some sheep are white or have spots on head and legs.

The wool is very long and curly (staple-length 25-30 cm with a fibre diameter of 15-60 micron). Legs and head are unwooled, except for a little tuff on the forehead.

The position of the ears is almost horizontal, the shells downwards. The tail is very long with very long wool. The horns of white and cream animals are yellow, sometimes with black stripes, the horns of the black are black.

Lambs of the cream variety are born with a yellowish to dark-brown fleece, getting lighter with growing.

The Racka is a relatively shy and very resistant breed, that can have a reasonably production under harsh climatological conditions.

The flock-instinct is extremely developed, they are grazing as if they are tied shoulder to shoulder, they can live on dry hay.

Racka Ewes produce 50 to 70 lt of milk during 100 days of lactation. The Racka was mainly kept for as well the meat, the milk and the wool.

What is the weight of mature Racka Sheep? 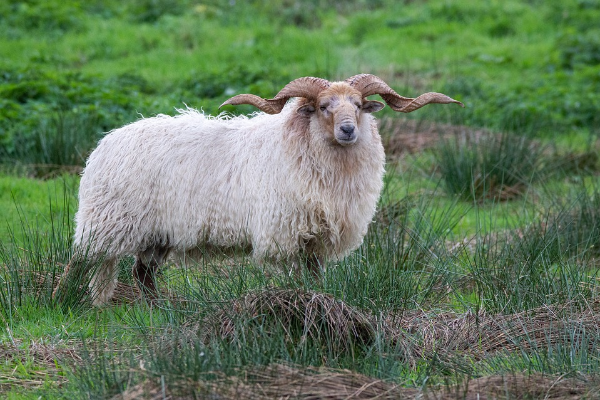 Racka ram is weigh around 65 kg and a mature Racka ewe 40 kg.