What Is The History Of Thuringian Goat Breed?

The Thuringian goat is a dairy goat breed from Thüringen in central Germany. It is a breed that has been selectively bred as an improvement on the German Improved Fawn goat breed. It was developed to have better milking production than the German Improved Fawn goat breed as well as be able to be used for meat production. The Thuringian goat breed is derived from the selective breeding of crosses between Toggenburg, Harzerziege, Rhönziege, and Thüringer Landziege goat breeds. It was developed around 1885.

They are very rare today and very much in danger of becoming extinct. 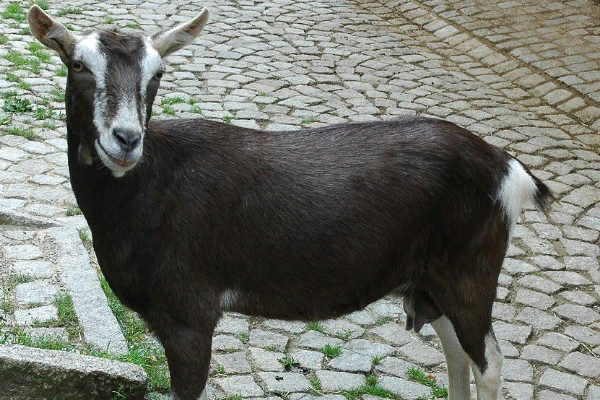 What Are The Characteristics Of Thuringian Goat Breed?

Thuringian goats are medium-sized animal. The average height of the bucks is 78 cm, and 74 cm for the does. Both males and females can have horns, however, they have also been found without horns The coat of this breed is brown and black, with some white spots on the body including the legs and face. Usually, the tonality of the face is lighter in colour than in the rest of the body. The ears are straight, of medium size and with an upward direction, they are white, and usually, the white colour comes from the snout and extends to the ears. This breed has 3 types of fur, long, medium and short. And the coat can be both thin and thick.

They are very strong and hardy animals. They are well known for their ability to walk long distances and also for their adaptability to the mountainous regions. Another characteristic that comes out of this breed is that they have extreme vigour, this is one of the reasons why breeders prefer it. Thuringian Goats have a strong resistance to disease and parasites. They are also excellent for keeping grass and thick bush under control. They are often used in the maintenance and clearing of brush and fields. It is a very independent breed and does not need the daily care of the breeders. Thuringian goats have little weight gain compared to other species.

Today with their numbers as low as they are the goat is no longer used for meat but rather as milk and foliage control goat. They can also be kept as pets as they are very friendly, well behaved and seem to like human interaction. The Thuringian does on average produce about 700-1000 kg of milk per lactation. Their milk on average contains butterfat of 3.5 percent. Females of this species usually have calving of twins and in some cases calvings of triplets. The mating season is only once a year. Both male and female reach a sexual age which is average with other species.

What is the weight of Thuringian Goat?

Adult Thuringian bucks on average weight about 55 kg and the does about 48 kg.