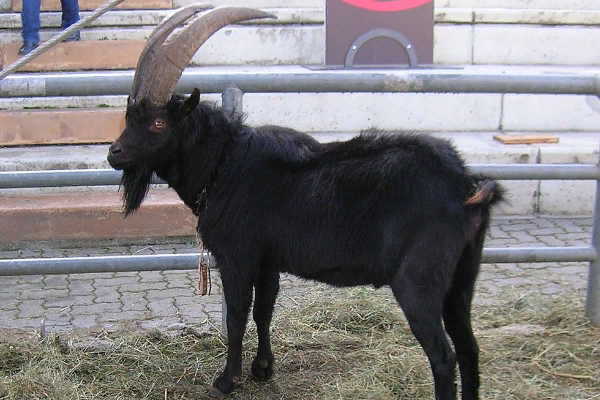 What Is The History Of Valdostana Goat Breed?

The Valdostana is an indigenous breed of domestic goat from the autonomous region of Aosta Valley in north-western Italy, from which it takes its name. This breed's main purpose is to produce milk and meat. In the Aosta Valley, it is also much used in the traditional sport of goat-fighting, the Bataille des chèvres. The large horns of the breed are probably the result of selection for this purpose by farmers.

Initially widespread in the Graie and Pennine Alps region, it is now particularly appreciated and bred in the Aosta Valley and in the Upper Canavese (Susa, Locana, and Chiusella Valleys). The areas of greatest concentration are the valleys of Gressoney and Ayas and the low central valley on the slopes of the Dora Baltea up to Aosta. It is the most widespread goat population in the Aosta Valley.

First news of Valdostana breed is contained in documents dating 1917, although that description does not seem to retrace the present-day Valdostana.

Valdostana Goats are similar to the Alpine Goats in some respects, but they are different in the size, the square-built shape, and even more in the powerful horns that are present in the females as well. It may come from hybrids between Goat (Capra hircus) and ibex (Capra ibex). They are perfectly adapted to the mountain environment.

It is one of the forty-three autochthonous Italian goat breeds of limited distribution for which a herdbook is kept by the Associazione Nazionale della Pastorizia, the Italian national association of sheep- and goat-breeders. At the end of 2013, the registered population was variously reported as 959 and as 856.

What Are The Characteristics Of Valdostana Goat Breed?

The Valdostana goat is a large animal. The average height of buck is 80 cm, and 75 cm for does. The head is heavy and robust, the concave front-nasal profile and the lively expression. The ears are erect, rather small, pointed, and facing forward. The forehead is wide, the horns very developed, robust and saber-shaped in the male, turned backward and shorter in the female (exceptions are the battle subjects where the development of the horns is sometimes greater than that of the males). Beard is frequent. The neck is rather short and robust. The thorax and abdomen are broad. The back region is large and straight. The limbs are medium long, solid, and black horns. Various colors in the coat: brown, black, ash grey, and dark with a dab of blond.

The Valdostana is kept both for meat, which is consumed both fresh and preserved in the form of goat salame, of Motsetta or of Violino di Capra; and for milk, which is used for cheese-making. A study in 2002 found the average milk yield to be 249 kg in 197 days.

What Is The Weight Of The Valdostana Goat?

The bucks on average weight about 85 kg and the do about 65 kg.